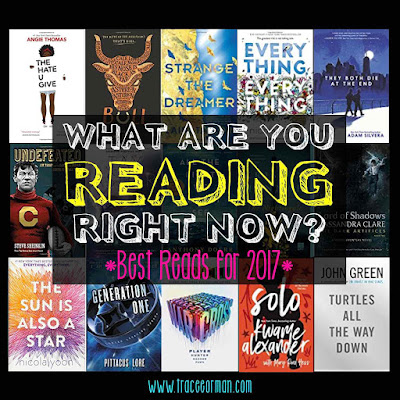 Best Reading Picks for 2017 OR Books to Stock in Your Classroom Library...
What are you reading (or want to read) this summer? Are you looking for some suggested books for your classroom library? I added (or plan to add) these books this year and am hoping to find time to read and re-read them this summer and fall.

Please contribute to my list with your own suggestions in the comment section below! (Note: These books include associate links to Amazon.com at the bottom of the page, but you can probably find the books at your local library or bookstore of your choice.) 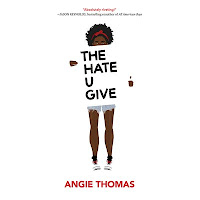 1. The Hate U Give by Angie Thomas
I read this book when it was first released earlier this year. It took me just a day and a half, but I had to stop several times for emotional breaks. It's a powerful book and gives the reader a first-person look at a shooting of a young black man by a white police officer from the teenage perspective. Every teen (heck, every human) can benefit from reading this book. It may just change the way many think about movements like #BlackLivesMatter. This is one that I would love to incorporate into my high school curriculum. At the very least, it is a MUST for your classroom library.

2. All American Boys by Jason Reynolds and Brendan Kiely
Two alternating perspectives about the fallout from one explosive event of police violence. There's some language, but overall it should be appropriate for middle and high school students. It's another contemporary book dealing with race, police brutality, stereotypes, and white privilege. Though the hardcover was released in 2015, the paperback will come out this fall.

3. Strange the Dreamer by Laini Taylor
I really fell in love with Laini Taylor's Daughter of Smoke and Bone trilogy (if you haven't read that, DO SO NOW! It's so good.), so I look forward to reading this novel. It IS a two-book series, so if you hate waiting for the second book to be published, you may want to wait to read this one. It's a fantasy novel about dreams and a mythical lost city called Weep. It's hard to imagine she'll be able to top her previous work, but if she comes close, this book will become a new favorite of mine.

4. What Light by Jay Asher 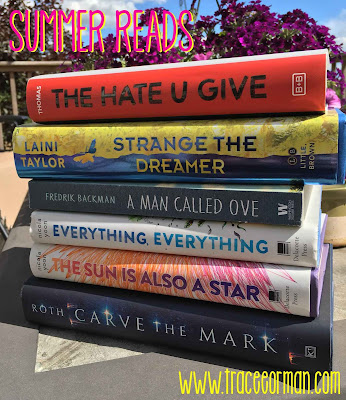 New fans this winter were introduced to Jay Asher via the Netflix series of his novel Thirteen Reasons Why. Asher's newest novel (released last fall) is a much more light-hearted love story, though it does deal with themes of forgiveness and shame. Teens will resonate with the main characters and adults will be reminded of their first love.

5. & 6. Everything, Everything and The Sun is Also a Star by Nicola Yoon
With the release of Nicola Yoon's first novel as a movie this summer, it's a great time to read (or re-read) Everything, Everything. It came out in 2015 and has received praise by authors and readers alike. Her latest novel, The Sun is Also a Star (released in November 2016), has received similar accolades. Though both books are about love and overcoming obstacles, they are both unique. Many praise the fact that Yoon includes diversity in her characters, which is often lacking in young adult literature.

8. Generation One (Lorien Legacies Reborn) By Pittacus Lore
The author of the I Am Number Four series is back with a new series that takes place a year after United as One. Because of the "Loric energy" that the Garde spread to protect humans during the war, human teenagers began to develop powers of their own. This series follows the Garde's efforts to train the teenagers to control their powers.

9. The Nightingale: A Novel by Kristin Hannah
Not only is this a great historical novel, its hero is a female based on a real-life World War II hero, Andree de Jongh. She creates an escape route out of Nazi Germany and her efforts are overlooked by the enemy because they don't believe a woman would be capable of such a feat. The novel celebrates this unsung bravery. While the hardback has been out for a few years, the paperback was released this year, making it more affordable for your classroom library.

10. All the Light We Cannot See by Anthony Doerr
Here's another best-seller that was released in paperback this year. Set in World War II France and Germany, it brings together a blind French girl and an orphaned German boy on opposite sides of the war front. It's beautifully written and rich with figurative language.

Author David Elliott takes the story of Theseus and the Minotaur and updates it with a modern twist: the story is written entirely in verse, with rhymes that will catch the attention of your high school students. Many critics compare it to Lin-Manuel Miranda's retelling of Hamilton with equal commendations.

12. Solo by Kwame Alexander {Available August 1st}
This new book by authors Kwame Alexander and Mary Rand Hess is written in poetic verse. It's about a 17-year-old boy who finds out he's not who he thought he was and seeks to find his birth mother. Classic rock by Metallica, Lenny Kravitz, and more is interwoven with original verse to tell the hero's journey in a unique and refreshing way.

13. Undefeated: Jim Thorpe and the Carlisle Indian School Football Team by Steve Sheinkin
This is a great read for those reluctant readers; though it's introduced on the premise of being a sports underdog story, your students will become engrossed in all the obstacles faced by Thorpe and his teammates. It allows for discussions on racism, persecution, determination, and hard work. It is definitely suitable for middle-school students.

14. Vincent and Theo: The Van Gogh Brothers by Deborah Heiligman
Vincent van Gogh wrote over 600 letters to his brother Theo; the author uses these letters and more to paint a picture of the love the brothers had for one another. This biography is well researched and riveting.

15. You Don't Have to Say You Love Me: A Memoir by Sherman Alexie

Warning: This book contains profanity and adult situations that are not suited for younger readers. Students who will gravitate toward this will be those who may have read Alexie's novel The Absolutely True Diary of a Part-time Indian or those who have had difficult relationships with a parent. But it is a powerful and heart-wrenching read for anyone. I recommend this for upperclassmen (junior/senior level) and mature underclassmen. His writing style alone is worthy of exploration by students.

Don't miss these books by your favorite authors this fall. They are sure to be in high demand by your students.

16. Warcross by Marie Lu {Availablein September 12th}
From the author of the Legend and Young Elites trilogies, Marie Lu writes about an addictive video game and the hackers hired to flesh out those who are betting illegally on the game. Your students who love technology and gaming will be enthralled.

17. They Both Die at the End by Adam Silvera {Available September 5th}
Two boys are given the news that it is their last day to live; they decide to make the most of their last day by packing in a lifetime of memories.

18. Turtles All the Way Down by John Green {Available October 10th}
It's a new John Green novel; what more needs to be said? If you are, however, curious about the title and plot of the story, learn more via Entertainment Weekly's post here: Everything We Know About John Green's New Book


You can find the books on Amazon here:

What are YOU reading this summer?

Which books do you recommend adding to your classroom library this fall?