Allegiant: What I Liked, What I Hated... 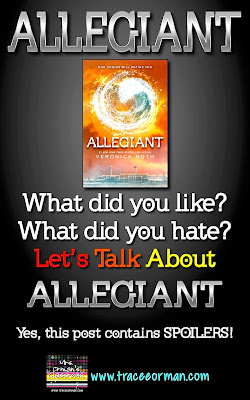 I finished reading Allegiant, the third and final book in the Divergent trilogy by Veronica Roth, and would love to discuss it with you! We started a conversation on my Facebook page, but I thought the comment section below might lend more room for more discussion.

Tell us what you liked about the final novel AND what you didn't like (or hated). If you don't have an opinion you want to share, post anything about the series you'd like to share, or feel free to dispute mine (below). 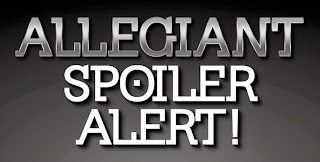 Read no further if you don't want the novel/series ruined for you!

Here are the top four things I really liked and I kind of hated (maybe "hated" is too strong...definitely "disliked"):

1. LIKE: I like the "genetically damaged" vs. the "genetically pure" conflict that is exposed in Allegiant. It is a perfect example of how a group of people (i.e. the government) can convince a nation that one group is superior over the other.
Sound familiar? White supremacists successfully delivered (and continue to deliver) the absurd message that all other races are inferior to whites and should not be allowed the same privileges. In fact, the Ku Klux Klan (KKK) is one of the leading groups in America that still preaches genetic purity.
I think this conflict in the novel creates an opportunity to discuss how easily we can be manipulated into believing these warped ideologies. "Scientific proof" (i.e. the DNA analysis in Allegiant) can be extremely dangerous in promoting hatred toward a group of people. Science can prove many things; while it does show differences between people in DNA, it is the human interpretation of those differences that creates biases. For example, we can easily interpret the facts to show how diversity makes a person stronger rather than weaker.
HATE: While it offers up great discussions and learning opportunities, it can be confusing to the reader. Being "Divergent" (having a more diverse background that favors multiple factions/personality traits) is synonymous with being "genetically pure" (or "GP") in Allegiant. In real life, "genetic purity" (most often used in agriculture referring to seed quality) refers to genes that are not diverse–or have not diverged from their origins. It's confusing to reverse that thinking while you are reading.
On top of that, the Bureau members don't treat Tris and the others differently. Why aren't they divided up into GPs and GDs? Why aren't they acting superior toward Caleb and Christina? We see Matthew acting that way toward Tobias, then Matthew turns out to be a supporter, so that doesn't really help reinforce that theme. The reader needs more examples of David or the other GP Bureau members acting superior to the GDs in Tris's group. For example, show us a scene in which Caleb is treated badly and Tris witnesses this. That would have helped Tris (and the reader) feel something other than disgust for her brother, and would have helped us hate the Bureau and eased the reader into Tris's final decision to sacrifice herself for him.
I also think one of the GPs needed to address the fact that Marcus is GP, yet he's violent. How do they explain that? I would have liked Tris or Tobias to challenge David or Zoe or someone on this point.

~
2. LIKE: I like the idea of the dual narrative, having both Tobias and Tris's points-of-view. I kind of grew tired of Tris, so I welcomed seeing things from Tobias's perspective. That said...
HATE: I can't tell the two narratives apart! Their voices are too similar, their thoughts practically interchangeable. I needed a more authentic "voice" for Tobias.
Also, I don't think either perspective was deep enough (or deep at all). Often, Roth repeats facts after switching narrators, but is that really necessary? The repetition became so boring I really didn't want to continue reading. 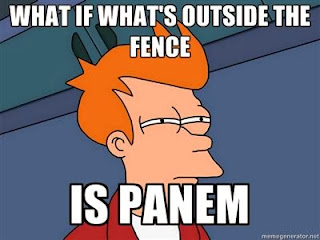 HATE: Perhaps Panem would have been more exciting... I felt like 500 pages were devoted to a bunch of teens hanging out in a hotel room not talking to one another. I mean, seriously, no one talks to each other. What is wrong with these kids?
And what exactly does this hotel room look like? Is it one big room? Does it have a kitchenette? Do they all have cots or do some characters get the hotel beds? Why don't any of them confront Peter and Caleb for their past behavior? It's so uncharacteristic of teenagers.


~
4. LIKE: The ending. Yes, I am OK with Tris's fate. Perhaps it was because I grew so tired of her by the end. That sounds so cold, so let me say that I did cry when she died and when Tobias found out.
HATE: The length of the book to get to the end. I think it could have been half the size or shorter. The whole time I kept thinking the book was a ploy to sell Four's short stories rather than a novel to finish telling Tris's story. It felt contrived.

So now it's your turn! Please comment below and share what you like/don't like about Allegiant. And feel free to dispute any of my comments. I will not be offended!


Thanks for reading and sharing!
Posted by Tracee Orman at 7:57 PM